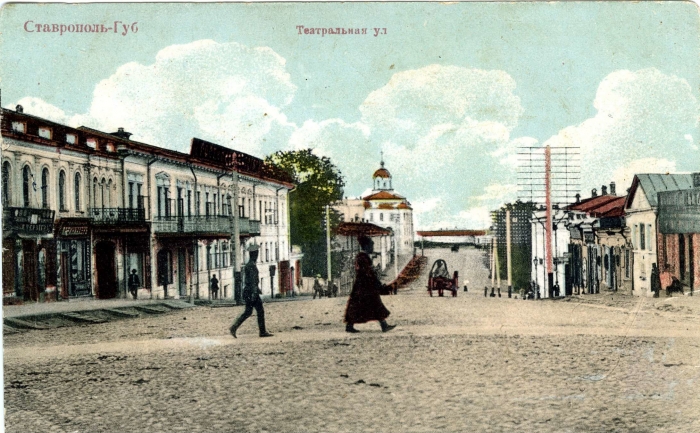 In 1845, a Stavropol merchant Ivan Ganilovskii constructed a new theater building instead of the almost ruined wooden one. This year is considered the time of creation of the first Russian theatre in the Caucasus although the first productions took place in 1843. Then the troupe broke up and its part left for Tiflis ,where in the same 1845 "finally, the theater was established to great pleasure of educated people".

The contemporaries noted that the Stavropol theatre building "is able to compete with a number of theatres of our best provincial towns". In 1845 St. Petersburg journal "Repertoire and Pantheon. Theater review" published a note about our theatre: "A new stone building with a beautiful foreside was erected. It is supposed to be a theatre, it has two tiers of boxes and a gallery in the third tier. This building may represent a city, which is larger and better than Stavropol... The interior of the theater is rather well decorated and illuminated by gas”.

Since then, the fame of the Stavropol theatre was continuously growing. A disciple of the great Schepkin Nikolai Rybakov acted on its stage for three years. The Caucasus governor, kniaz Mikhail Vorontsov, granted to the theatre an annual allowance of 1200 rubles for its successful activity. Local merchants also helped the theater. The theater's repertoire from the late 40s of the XIX century included plays by Griboedov, Gogol, Shakespeare and Schiller.

The theatre audience was quite specific, f.e., retired officers and exiled Decembrists. An outstanding Russian actor Nikolai Nikolaevich Sinelnikov, who played in our theatre between1878-1880, once said that every young actor in the south of Russia "aspired to act at least one season in the Stavropol theatre. The public of this town has always been sensible, exacting and fond of theater. ... If an actor was approved by the Stavropol audience, he can safely act in any Russian city".

At the turn of the XX century, the plays by Chekhov, Ostrovskii and Alexei Tolstoi were staged in Stavropol. An important point was the staging of Maxim Gorkii’s plays, since his work "Philistines" was always allowed on a special request.

The biggest figures of Russian theatrical art successfully performed on the Stavropol stage. Back in 1894, Fedor Shaliapin gave an excellent concert here and described that tour with great humor in his memoirs.

Since 1964, the Stavropol theatrе has been named after Mikhail Lermontov. Its troupe now works in a new magnificent building looked like a real temple of Melpomene. The Officers’ Club of Stavropol military reservation is located in the previous theatre building.