The former trading rows, the Church of the Saviour Transfiguration 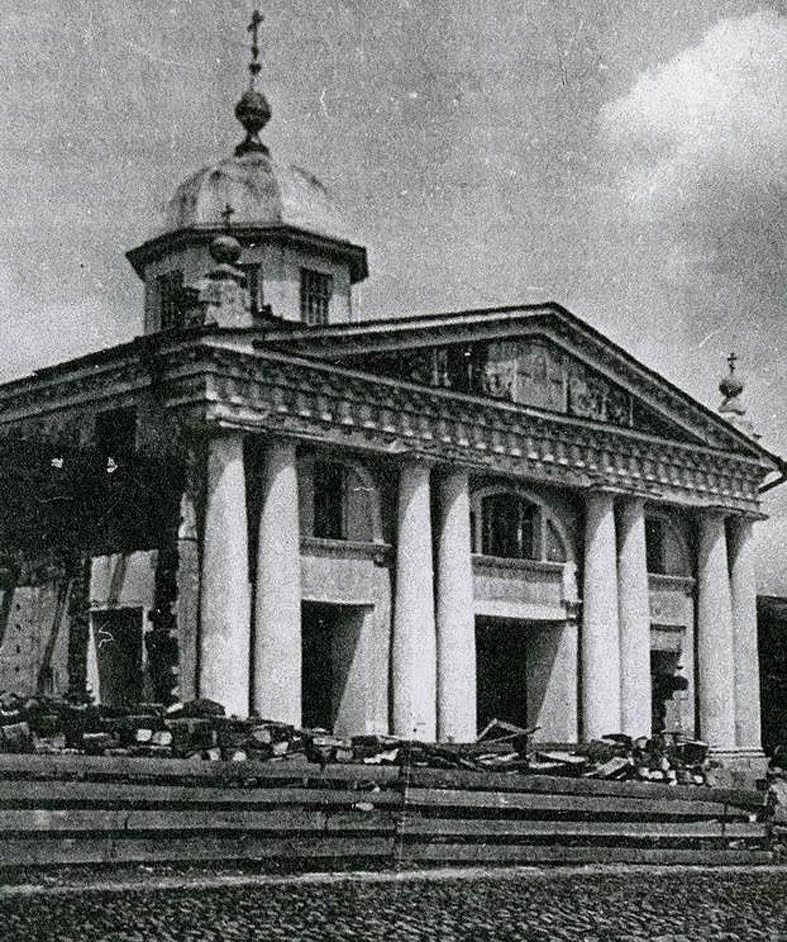 The first Stavropol trading square was situated right opposite a cascade staircase leading to the Kazan Cathedral. Along the avenue there were some classical buildings known as the Commercial row. There was a non-typical Church of the Saviour Transfiguration among commercial buildings. It had a strict classical foreside with columns, and only the dome reminded of its religious role. The western building of the Commercial row remained unchanged, and now it is situated along Karl Marx Avenue, 79. The other buildings were demounted.

In the year 1837, which was memorable for Stavropol, an exhibition of the achievements of the Caucasus people was held in those trading rows. Once visited the exhibition, the emperor Nicholai I paid a special attention to the samples of silk fabric original from the farmstead of Alexei Fedorovich Rebrov. The emperor praised the level of silk farming, underlining that "we are able to compete with the French people". After the exhibition, Rebrov was awarded the second-degree order of Saint. Stanislav.

This trading square became a place where in 1840 were constructed Stavropol first water plumbing and a pool receiving water from a brook Aulchik, the source of the river Mutnianka, located near the present Top market. Specialists from Turkey and Persia were hired to lay the pipes, and a merchant Gavriil Tamamshev, who sponsored this building and the other ones, finally became an honorary citizen of Stavropol.

On June 7, 1905, the religious debates between Orthodox Christians and Old Believers took place in the Church of the Saviour Transfiguration which ended in abuse exchanging. The crowd accused the Old Believers of insulting the faith and threatened with physical violence. The priests got the parishioners out of the church, and left the molokans inside. The crowd became bigger and reacted neither to the police nor to the governor’s Veliaminov persuasions. Thus, the soldiers were called. By nightfall, the crowd became more aggressive. There were calls to extradite the Old Believers, destroy the church and kill the security guards. There were noted especially young people’s active actions. Police defined six of them as “provocative”. By midnight, the soldiers were shot by stones, and the crowd began to move forward. The military were forced to open fire. 116 people were killed or injured. These events figured in history as the "Bloody day of Stavropol".

The funeral of the victims turned into a mass demonstration that gathered about 1,000 people: workers, students, teachers, lawyers. There were laid wreaths on the coffins of the dead with inscriptions: "Victims of lawlessness", "Victims of the actual regime". Anti-government speeches were given at the cemetery, and the money was collected for the families of dead and wounded people. After a while, leaflets were occasionally distributed to accuse the tsar and the governor and encourage the soldiers to join the people. The governor Veliaminov was convicted, but finally acquitted.

Now there are accommodation units and parking zone in these places.