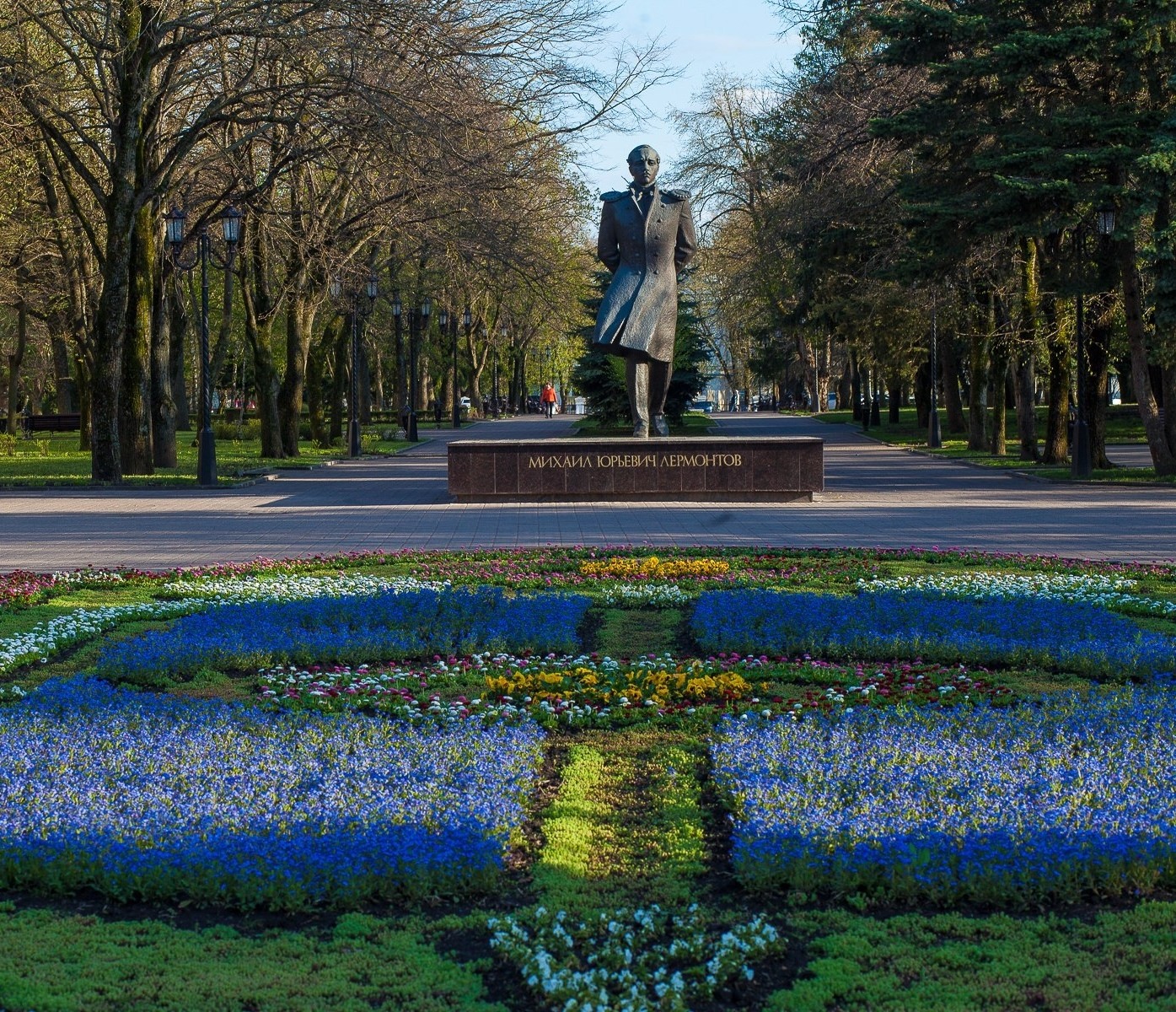 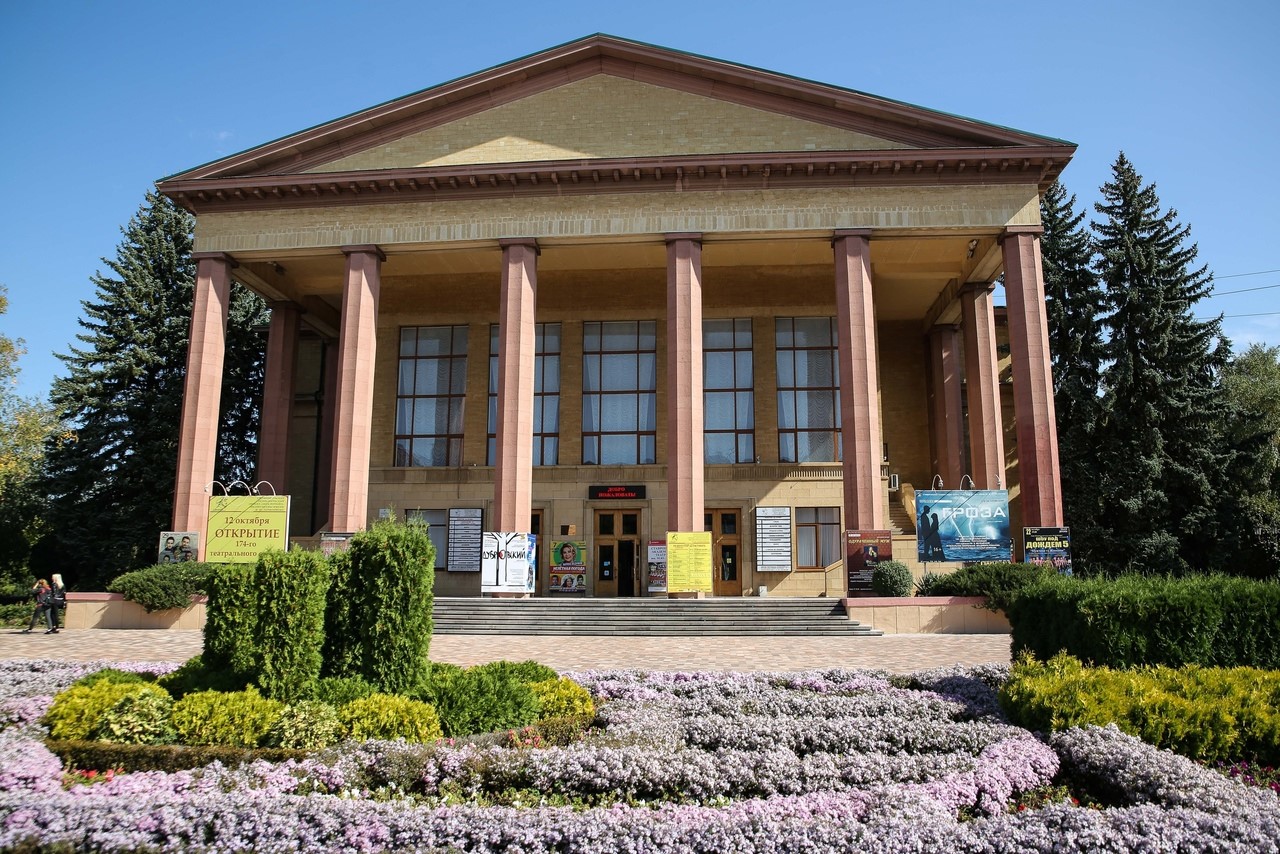 We are suggesting you to have a walk around Theater Square of our wonderful city. Just imagine, one of the richest collections of plants (not taking into consideration Stavropol Botanical Garden) can be found here, on this tiny spot of soil, which occupies only 3 hectares. More than 700 verieties and forms of trees, bushes, flowers that are collected all over the world (North America, North-East Asia, Central China, and Japan) are planted here now.

Formerly, only limestone, which appeared on the surface of the whole territory of present Theatre Square and Lenin’s Square, could be seen here. To plant a tree, it was necessary to dig a hole and bring the soil. Just imagine, it means a lot of work for people, who took part in the diligent creation of the Square. Seedlings of trees and shrubs had been grown in Stavropol Botanical Garden. Blue spruces were brought from Nalchik, and Oriental planes came from Armavir. Dendrologists selected tree and bush varieties were selected in a special way so that citizens and guests could enjoy the color palette all year round. This is how wonderful garden, with vast varieties of trees and bushes, broke continuous stone. Surrounded by forests, Stavropol has found another embellishment in the form of Theater Square. This place became a diamond of city’s green necklace.

French formal garden is a dominant style in the Square. Such form of planting the alleys was popular in 20th century and prevailed in many cities of Russia. Regular straight firs, just like guards of honor, that lined up next to the Stavropol Krai administration building, they hold up harmful emissions and dust, reduce noise pollution. They protect the Square from the main road that are busy with cars. Square is full of lush conifers and different varieties of temperate deciduous trees. It is possible to see apple trees covered with pink haze of flowers, bird cherry trees, mountain ashes, weeping willows, and next to them pollarded in the form of pyramids larches can be seen. While you are in the Square, pay attention to the flowerbeds. Owing to the toilers of Gorzelenstroy, flowers here are changed seasonally.

One of the main decorations during warm season is a pond that has regular seashore form with 2 fountains. It became favorite place of mothers with their children and good point to meet up after classes for students.

You can find a bunch of interesting sights in the Theater Square. For instance, well-known Dramatic Theater named after Mikhail Lermontov. It was established in 1964. Here is a monument to the poet that was erected in October of 1994. This was a special day, 180th birthday eve of Great Russian writer. Sanjarov, the sculptor, portrayed the poet as no one else could. Pay your attention to one interesting detail. The lap of his kaftan is windblown. It is believed that notorious Stavropol winds inspired the artist. Moreover, there is another monument established for the former major of the Krai capital, Andrei Hasanovich Djatdoev, who administered the city for 8 years, and one of the alleys was named after such a splendid person. A lot of positive changes took place in Stavropol when Andrei Djatdoev was the leader of the city: tiled footpaths were renewed, Peshekhodnaya Street (pedestrian area) was established, new parks and pleasure grounds were created. This legendary person does deserve to be fondly-remembered.